For those who aren’t familiar, Hacker News is a popular site where a community of techies discuss a wide range of topics. According to HN’s guidelines, on-topic submissions are “[a]nything that good hackers would find interesting. That includes more than hacking and startups. If you had to reduce it to a sentence, the answer might be: anything that gratifies one’s intellectual curiosity.”

Getting your content on the HN front page can be a big deal, a fact that hasn’t escaped spammers. To keep them at bay and maintain the quality of the site, moderators have had to be quite active. And whether you’re in agreement with it or not, it’s fair to say that they’ve operated opaquely, from hellbans to the slap — where a submission rises to the front page, and just as quickly vanishes from it.

Mods can kill a submission and instantly send it into oblivion. But more marginal submissions can also be flagged by mods or users for being off topic, low-content fluff, spammy, or otherwise poor quality — or perfectly valid submissions by those who disagree with it. This can even happen to articles occupying the coveted top spot, with plenty of points and a lively discussion. If enough mods and users flag it, it’ll quietly slip down the rankings and off the front page.

From the perspective of the community, these are silent failures. They’re a missed opportunity to learn how the flag feature is being used and what content the community does (or more to the point, does not) value. If you’ve been visiting HN for awhile, you might feel that you’ve already developed a sense for how things work. But as a recent analysis of HN shows, the reality can surprise you.

I wrote a user script that highlights the submissions that have been on the receiving end of the slap. The script inserts scores based on the HN ranking algorithm, a function of each submission’s points and age. Submissions ranked below others with half their score are highlighted in red; a rough heuristic but definitely indicative of being slapped down. Weaker candidates are highlighted in orange; while they may have penalized, it could also be explained by the algorithm being out-of-date or incomplete (it is).

The script also works on the Hourly HN Snapshot archive. Try it out on past frontpages, like October 27, 2011.

You can get the script here: http://userscripts.org/scripts/show/150452.

Install it in Chrome either by downloading the file and dragging it into the Extensions tab (sadly, user scripts can no longer be installed directly), or through the extension Tampermonkey. Firefox users can install through Greasemonkey. 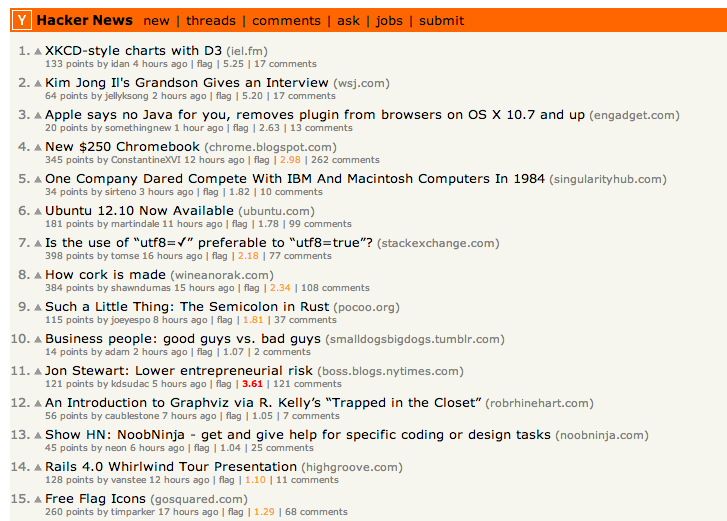