Yesterday, Microsoft’s Steven Sinofsky responded to chatter about how Windows 8, in its grand debut, was demoed almost exclusively in landscape mode. In the post, he affirms Windows 8’s agnosticism. Our point of view is that both portrait and landscape orientations are important, and experiences can be great in either orientation. Rather than picking a posture and orientation for optimization, we designed an experience that makes sense regardless of how the device is held, one that feels tailored for the app and its content.

Ignoring that the first Windows 8 tablet from Samsung has its hardware button positioned to make landscape the default, and the packaging to reflect that (in contrast to the iPad), Sinofsky’s response still rings true. This informal survey from Ben Brooks further underscores his point.

This naturally leads to questions about when and why people might favor one orientation over the other. Most users probably hold their tablets in landscape to watch videos and in portrait to read long-form text. But what about for all of the other ways tablets can be used?

Since I’m not privy to data that might answer this, I thought an interesting proxy might be to look at how apps are presented in the App Store. Do apps tend to feature screenshots in one particular orientation? Are there patterns among certain classes of apps? This reveals a bit about how apps are designed to be used or how the developers idealize it.

Surprisingly, only 21 percent show off their app in both orientations.

Despite the primacy of portrait in Apple’s iPad marketing, the majority of top paid apps use landscape in theirs, at least within the App Store. That’s no guarantee of course that this is how people spend most of their time on their iPads, using these and other apps.

Not all categories are represented equally in top paid apps, which happens to be extremely game heavy. By looking at each App Store category individually, a better picture emerges of the diverse ways that iPads are held and used. 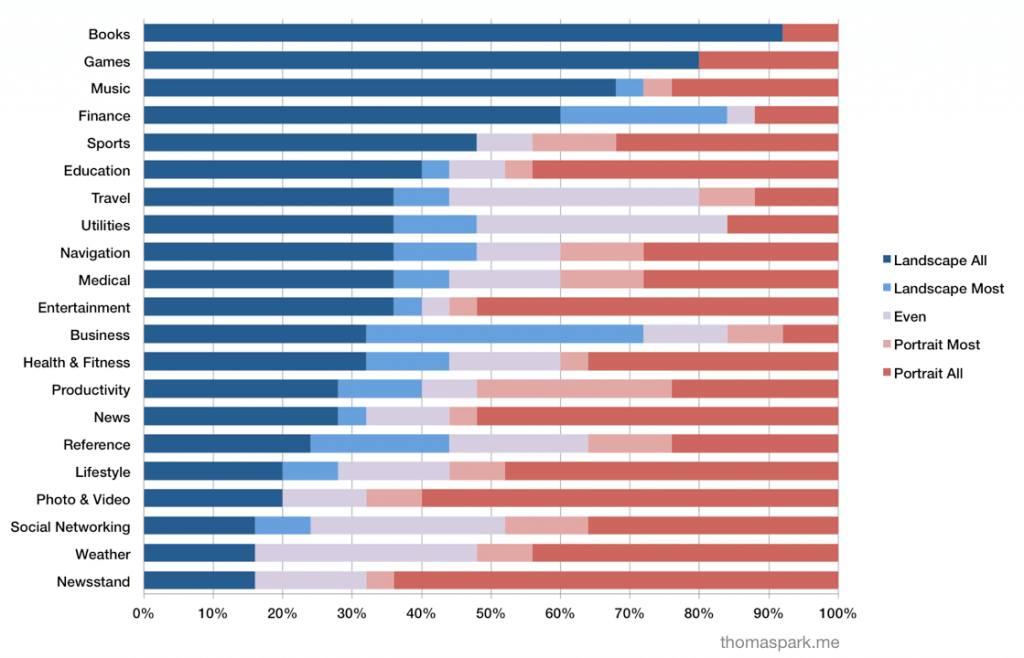 Platforms today are recognizing that great user experiences have the potential to be created in either portrait or landscape, and this is certainly an important first step. But this graph renews questions about when and why developers choose one orientation over the other, and what opportunities there are for both new and existing apps to make better use of the available space, however the tablet is held.

Given how only 21 percent of iPad apps show themselves off as fluid between landscape and orientation, one wonders if Windows 8 developers will be up to the task of building apps in both orientations, plus the snap and fill views, for so many resolutions and aspect ratios — and doing it well.